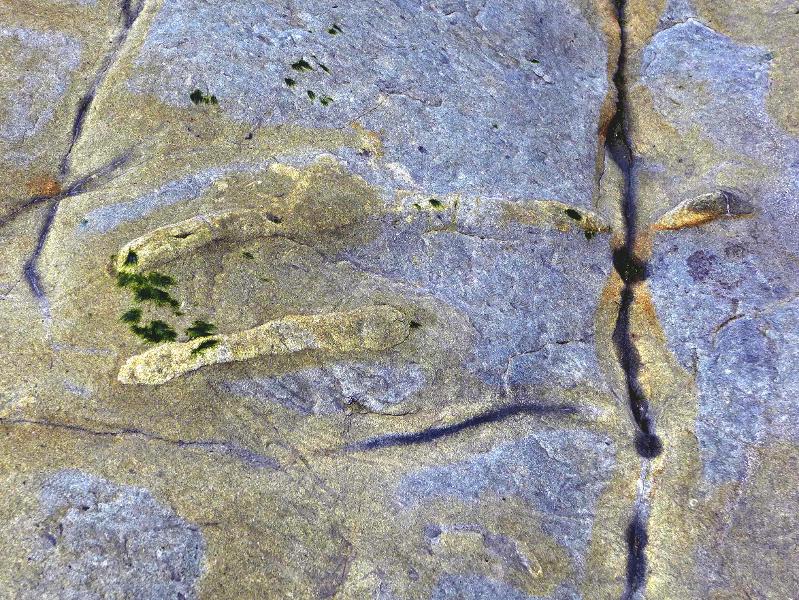 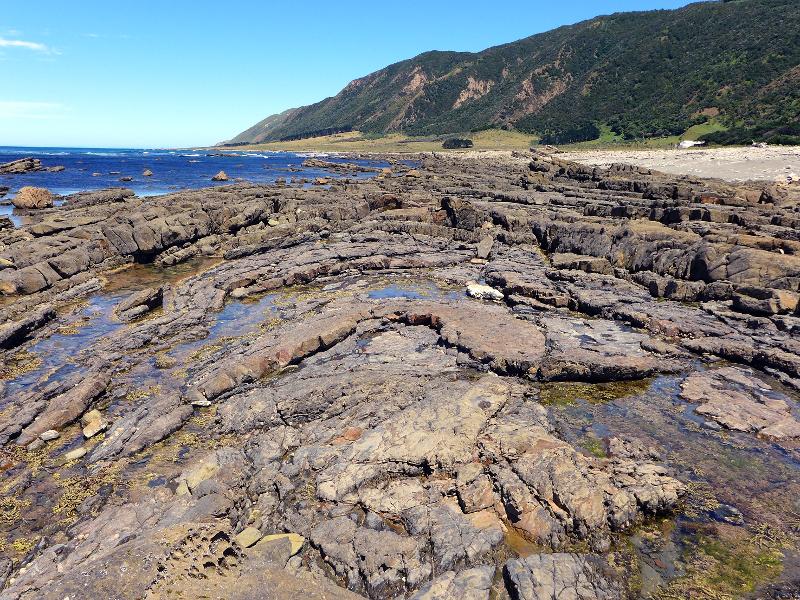 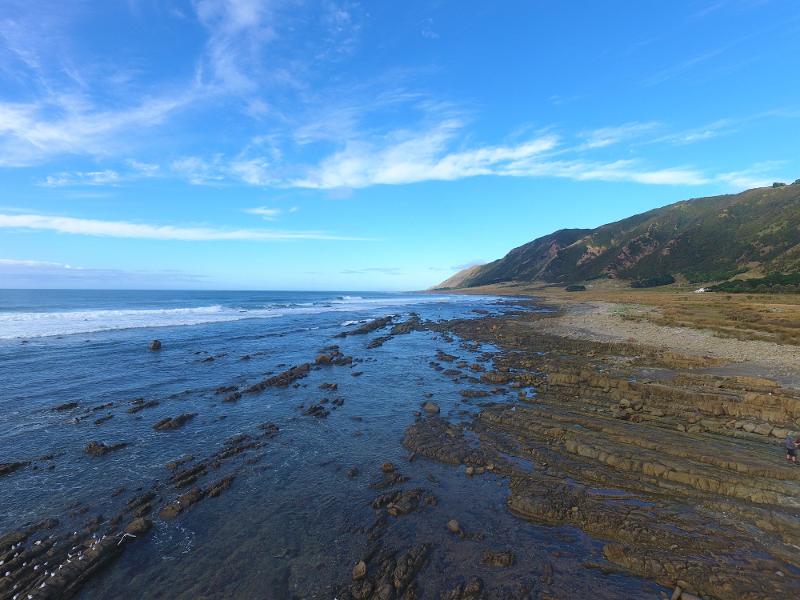 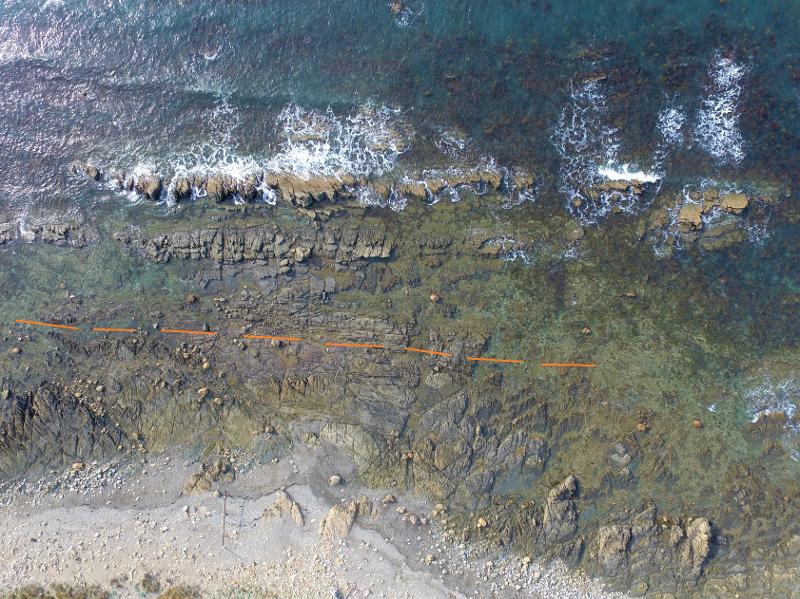 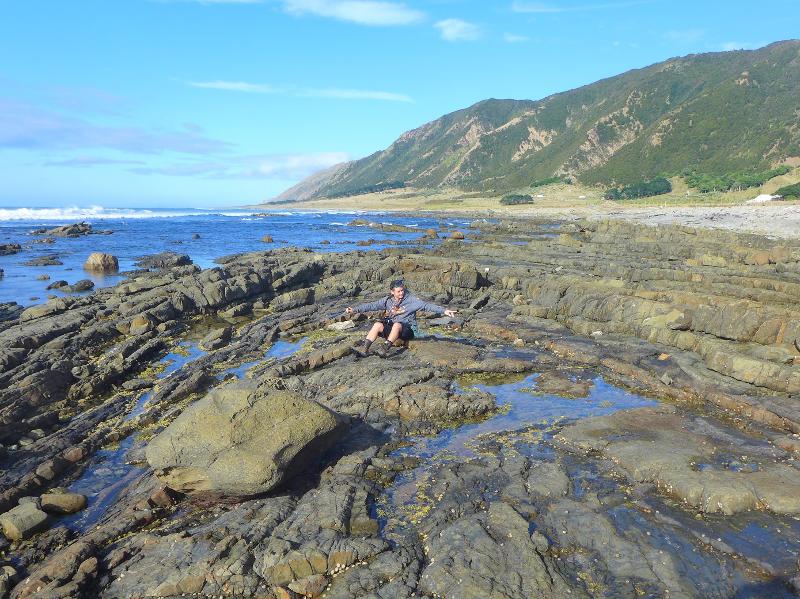 Sitting on the axis of the anticline. J.Thomson / GNS

Looking north east over the axis of the anticline, Tora Coast. K.Amai / VUW 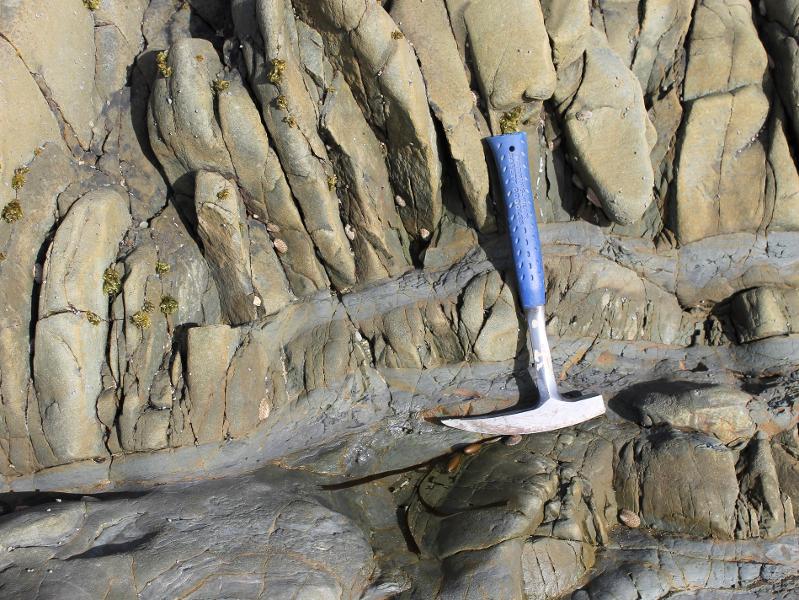 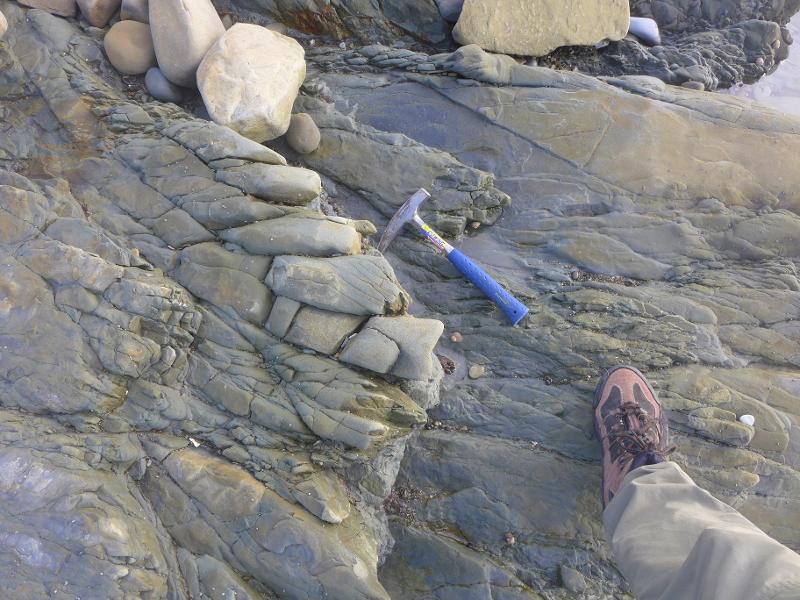 The sandstone layers are breaking up and eroding along joints. J.Thomson / GNS
Previous Next
Glenburn Formation buckling and uplift leads to erosion.

The fold at low tide, J.Thomson / GNS Science
The Tora Coastal anticline is an up-fold, caused by tectonic stress. The anticline has been beveled off by the ocean, exposing its internal structure.

Looking south west over the eroded anticline, Tora Coast. K.Amai / VUW
100 metres south of the Pukemuri Stream mouth, along the shore line, well bedded sandstone dips in opposing directions. Locally, beds to the east (partially submerged) are dipping eastward, into the water, while the beds to the west (along the beach) dipping west. When they were deposited, these rocks were all originally flat. These rocks are part of the Glenburn Formation, which is at least 62 metres thick in this area. Much of the formation was deposited in a deep submarine environment, but the rocks here (the upper layers of the formation) suggest a more shallow marine setting.

Looking in the central area between the two different orientated beds, you will be able to find a section of rock that is still horizontal. This is because you are standing on, and looking along, the axis of an anticline (up fold). The folding is a response to the pressure of plate collision along the Hikurangi subduction zone. This plate boundary (the interface between the colliding Pacific and Australian Plates) extends below the southern North Island at a shallow angle, from the sea floor 50 kms offshore of Tora. Below Tora, the boundary is approximately 20 kms deep.

Over time, the erosional force of the ocean has created a wave-cut platform, exposing the internal structure of the large anticline. You will see that the fold runs roughly north to south, parallel to the Hikurangi Subduction Zone/plate boundary.

Bird's eye view with approximate fold axis location marked. K.Amai / VUW
Within the Glenburn Formation you may find sedimentary structures such as ripples, cross bedding, faults and also occasional trace fossils. There are also occasional beds rich in fragments of Inoceramid fossils. These are a family of clam-like bivalves that became extinct at the end of the Cretaceous. Their presence in the Glenburn Formation at Tora tells us the rocks are at least 65 million years old.

From Martinborough take Jellicoe Street (1.8km), turn left onto White Rock Road (30km). Turn left onto Tora Road (13km), then turn right onto Tora Farm Settlement Road (4km) until you reach a bridge. There is one gate just after the bridge and another to the left which leads down close to the beach. Be aware that this track in on private Tora Station land,

Make sure to leave any gates as you found them; if it was closed, close it again once you have made your way through.
The anticline is best viewed at low tide.
Take care with large waves; Tora is an exposed beach on rugged coastline.

The outcrop is located about 100 meters south of the mouth of the Pukemuri Stream.